Over 80 million people in the world suffer from eating disorders, such as anorexia and bulimia nervosa.

Italy is not an exception. Anorexia and bulimia are the first cause of death among Italian teens and young adults.

When Simona–who, at the time employed with a private corporation in the food and beverage industry–first became aware of this shocking data, she was visiting her younger sister Stefania, a psychologist and psychotherapist working for the Children’s National Medical Center in Washington D.C.

While the study of mental health issues had always been part of the life of Stefania, until that moment Simona had looked at interaction with food only from a marketing perspective: trying to understand and anticipate consumers’ needs.

Being exposed to the work run by the Children’s National Medical Center–then focused on observing the essential psychological and physical implications behind the vital act of feeding–she realized that she could have put the skills developed working for the food industry at the service of others.

“That trip to the US changed my life,” Simona said. “At the beginning, I started volunteering part-time to help raise awareness of anorexia and bulimia. But soon I realized that I had to make a bolder decision. Thus, I resigned from my full-time job and, in 2015, my sister and I founded Never Give Up, a not-for-profit organization that prevents and treats eating disorders.”

In Italy, studies show that the average age of the onset of anorexia and bulimia is 12 years old, but cases of early-onset around 8-10 years are becoming worrisomely frequent.

The good news is that the earlier in the course of the illness someone is able to access treatment, the better their chance of fully recovering. The bad news is that it is estimated that only 10% of those who suffer open up and seek professional help.

“Unfortunately, often those who have issues with food and body image avoid acknowledging the problem. They shut themselves off and build a wall of silence around their sufferance,” Stefania explained. “This is why it is crucial to find the way to break this wall.”

In order to respond to this need, in 2016, the two sisters developed the Never Give Up Experience, a unique and innovative tool aiming at penetrating the silence and isolation surrounding the patients.

The Experience consists of an audio-video installation. A black box allows the participants to cut off any outside noise while listening to the testimony of a patient and at the same time looking at simple, but triggering images. After the Experience, participants can then have a follow-up talk with a psychotherapist–if they feel the need of it.

Since the launch of the Experience, Never Give Up has reached out to over 5,000 persons at festivals, concerts, universities, and schools.

The installation has triggered significant feedback from the participants: one in four people has asked for more information after trying the program, and more than 600 persons (1 out of 8) have asked for a free appointment with a psychotherapist.

“These may seem small numbers, but they mean a lot,” Stefania said. “They represent the possibility of intervening with psychological and medical support to prevent or treat the disorders at the earliest time.”

The Experience is coordinated by Ludovica, who joined the team in 2017. She’s helping bring the installation around Italy and strongly believes in its powerful capacity of engaging young people, in particular adolescents.

“What’s most rewarding is to see the change happening in the young girls and boys who got involved,” she said. “You can see that something is changing looking at their eyes. It’s like if you could literally hear a ‘click’ in their head once they understand that they are not alone; that they have someone they can talk to about their feelings, their pain.”

Today, the team of Never Give Up has further grown up thanks to a highly qualified scientific advisory board and of a pool of experts and professionals who work at counseling points in different cities in Italy, run scientific divulgation and sensitization programs side by side with Institutions. They also respond to a help mail through which the patients can book an appointment with professional counseling (now also available via Skype as a response to the COVID-19 restrictions).

NEVER GIVE UP Team does not seem afraid of big challenges, as in 2021 they will open in Rome the first Never Give Up House, a one-of-a-kind structure meant to host children under 14-year-old in a youth-friendly hub, engaging young patients and their family members through a family-based treatment approach.

NEVER GIVE US helps youth all across the world. You can learn more about Never Give Up and support them through a donation at: https://never-give-up.it/en/ 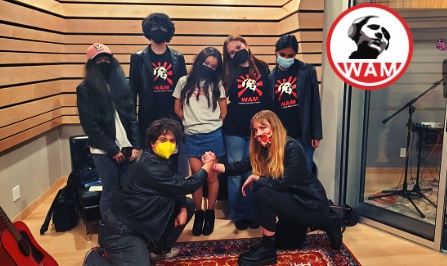 This Nonprofit Is Closing the Gender Gap in the Arts Our Impact: 10 Years of Born This Way Foundation A Season of Kindness